This violation of the sanctity of her temple provoked Athena, and she changed the beautiful locks of Medusa, which had inspired the love of Poseidon, into ghastly and living serpents, as a punishment for the desecration of that sanctuary, where only worship and incense should have been offered. 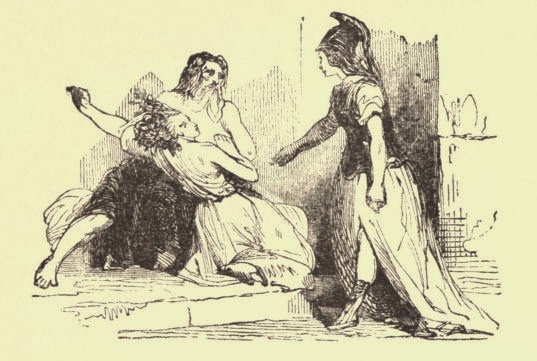 “Stheno, this is a tragedy that has consequences beyond these deaths. Poseidon’s head priest of his Athenian temple has been killed on his own feast day. Rape or not, no priestess of Athena can have ever been with a man, or even a god. You must leave as quickly as you can."

Perseus cut off the head of Medusa, whose glance immediately turned people to stone, and kept it in a bag around his waist.

Having warned Andromeda to turn away, Perseus quickly pulled out the ghastly head of Medusa, which immediately froze Phineas and his followers to the spot and their flesh was transformed into cool, hard, grey stone.


In Greek mythology, the hero Perseus was famous for killing Medusa, the snake-haired Gorgon whose grotesque appearance turned men to stone. This painting, however, shows a later episode from the hero's life. At Perseus's and Andromeda's wedding, their nuptials were interrupted by a mob led by Phineus, a disappointed suitor. After a fierce battle, Perseus finally triumphed by brandishing the head of Medusa and turning his opponents into stone.

Sebastiano Ricci depicted the fight as a forceful, vigorous battle. In the center, Perseus lunges forward, his muscles taut as he shoves the head of Medusa at Phineus and his men. One man holds up a shield, trying to reflect the horrendous image and almost losing his balance. Behind him, soldiers already turned to stone are frozen in mid-attack. All around, other men have fallen and are dead or dying. Ricci used strong diagonals and active poses to suggest energetic movement. 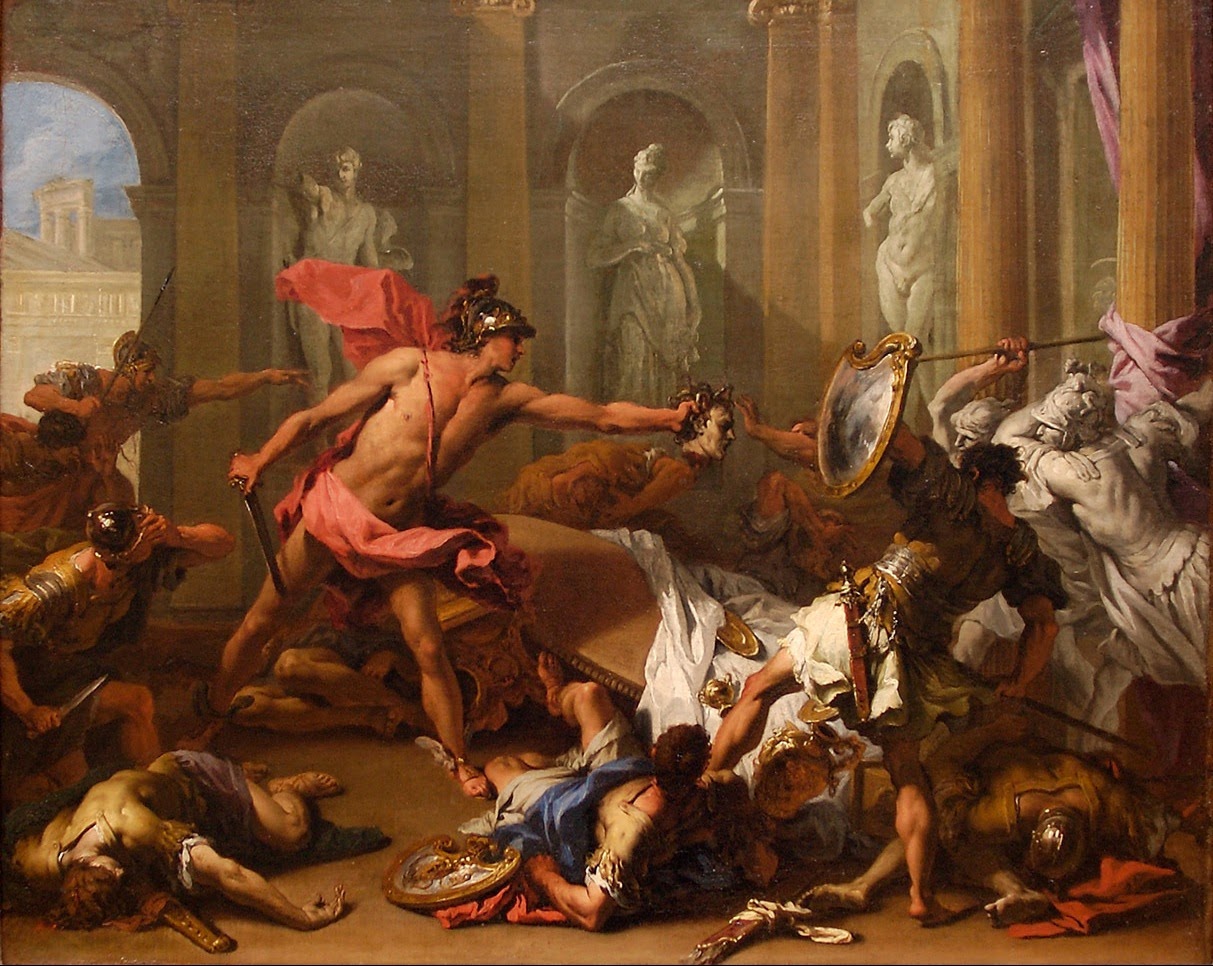 Sebastiano Ricci, Perseus Confronting Phineas with the Head of Medusa 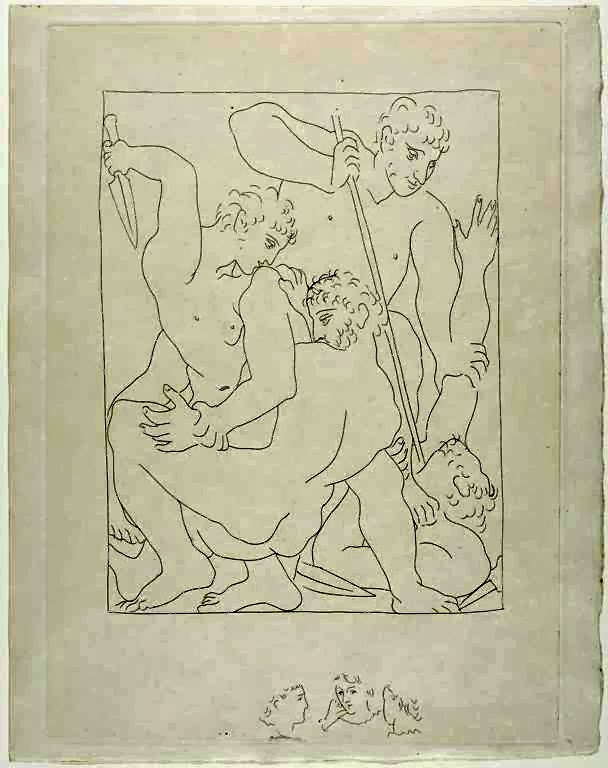 The Combat of Perseus and Phineas for Andromeda, from Les Métamorphoses, September 21, 1930, published 1931


The discerning reader will find "ice age remnants" within the stories of the Heroines of Classical Greece series. The gigantic mammals that roamed the far north didn't necessarily die out 10,000 years ago when the last great Ice Age ended. Some are alive today, like the musk ox, and a few species lived on well into the days of civilized man. In fact, wooly mammoths survived on a Siberian island while the pyramids were being constructed.

The mighty auroch was prominent in the ancient world. The forerunner of modern cattle, this beast dwarfed it's puny, domesticated descendants. This versatile beast was found over most of northern Europe and even in Africa and China, and was at home on the plains and in the forest. A universal black color with a lighter stripe down the spine, they were depicted beautifully in the paintings of Cro-Magnon in the caves of Lascaux, France.

The auroch was alive and well during the time of Ariadne. Massing over a ton, it was a feared and respected animal, though increasingly rare. It had survived predidation by saber-toothed tigers and dire wolves. With a mass half again or more than any living bull today and wide horns that splayed outward, an enraged auroch bull was the equal, if not the superior, to any living creature on the continent.


By the 13th century AD, the auroch was vanishing and found only in remote portions of Poland, the Baltic states, and Transylvania. In a rare consensus of conservation, nobles protected the last beasts by outlawing their hunting and even paying gamekeepers to provide and preserve fields for their grazing. In 1564 a census showed only 38 animals living in Poland, and the last Auroch died of natural causes within Poland's Jaktorów Forest in 1627.

Was the legendary Bull of Marathon a large Auroch? Nobody knows, but it's a reasonable guess. On a final note, it's possible that the auroch may come back from its extinction. For decades, agricultural scientists have been backbreeding primitive cattle to resurrect the auroch. Their DNA sequence has been analyzed and Polish scientists hope to bring the extinct auroch back someday to once again inhabit their ancient forests.

THESEUS AND THE MINOTAUR

Theseus wrestles the bull-headed Minotauros, surrounded by the fearful, sacrificial Athenian youths and maids. The ground is littered with the bones of the victims of the beast.

"[Theseus] shed the blood of the halfbull man [the Minotauros] whose den was the earthdug labyrinth . . . But you know your thread was his saviour: for the man of Athens with his club would never have found victory in that contest without a rosy-red girl to help him." 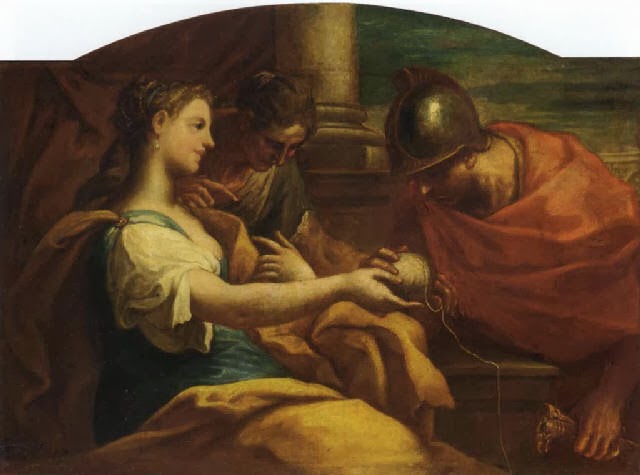 Email ThisBlogThis!Share to TwitterShare to FacebookShare to Pinterest
Labels: THESEUS AND THE MINOTAUR

The remainder of Theseus's life was as convoluted as that of Hercules. Theseus's marriage to the Amazon, Antiope (or Hippolyte), started a war with the Amazons which the Athenians won. 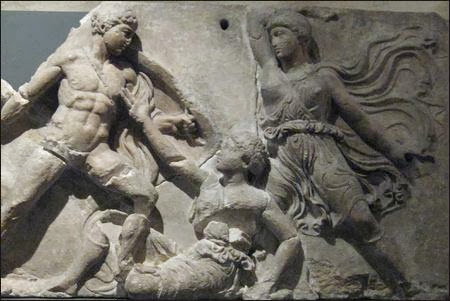 Antiope, one of the Amazon queens, fell in love with him. Betraying her sisters, she followed Theseus on his way back to Greece. The Amazons pursued the hero and Antiope to Athens, where they engaged in a fierce battle. Hippolyte, defeated, escaped to Megara, where she died.

Antiope and Theseus had a son, Hippolytus. Storytellers disagree on the way she died:Some say she was killed by an Amazon warrior, while others say that she was accidentally killed by an Amazon ally of hers, Penthesilia, while they were battling against the other Amazons. 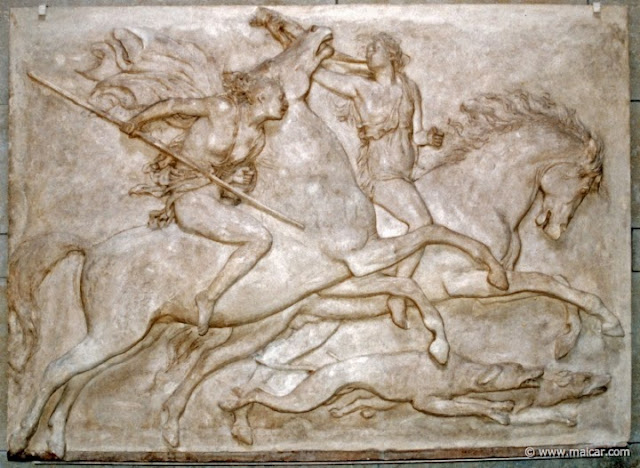 Antiope was the name of a daughter of Ares, the god of war, and a queen of the Amazons. The Greek hero Theseus carried her off.

Though hundreds of cubits separated the two craft, Theseus still cast a nervous glance behind, recalling a time when death stared him in the face through the bull’s eyes. When the sails were fully furled, the rowing master stopped his cadence and sent the youths to their tasks on the ships. Theseus found himself looking down to a long, tan pair of legs that sent his heart racing. They belonged to Antiope.

~ Excerpt From Ariadne: A Tale of the Minotaur

Email ThisBlogThis!Share to TwitterShare to FacebookShare to Pinterest
Labels: Ariadne, Theseus and Antiope 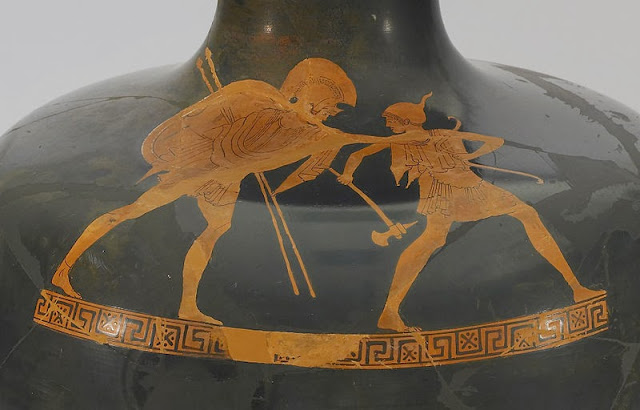 Two figures stand on a ground-line of meander on the shoulder of this hydria. At left, a young Greek soldier advances to the right, his legs and head in profile, with his torso turned to present his back to the viewer. He wears a chitoniskos, chlamys, greaves and an Attic helmet, its cheek pieces raised to expose his face. His left arm, obscured by his body, holds a shield and two spears. He extends his right hand toward the Amazon before him, and their gazes meet.

The Amazon attempts to flee from the soldier, her legs are in profile moving right, while her torso is depicted frontally and her head turns back to look at her pursuer. Like the soldier, she is clad in a chitoniskos, though hers has a loose kolpos in front, and she wears a short mantle, a disk earring, and a pointed cap, from which small curls emerge around the forehead. Her weaponry includes a bow in her left hand, and a sagaris, or small axe, ineffectually pointing downward, in her right hand.

The scene might depict Theseus, the Athenian hero who fought the Amazon queen Antiope.

Email ThisBlogThis!Share to TwitterShare to FacebookShare to Pinterest
Labels: Ariadne, Theseus and Antiope

An Amazon Queen. Theseus, in his expedition against the Amazons, fell in love with her and carried her off to Athens, where, in one story, she fought by his side against her sisters.


When the crowd thinned, he approached Antiope from behind as she stood atop the deck splicing a rope like an expert dockhand. She was indeed a study in physical perfection, a figure and face that haunted his dreams. He began to reach behind and discretely slip a hand under her skirt to return the teasing familiarity, but she twirled around like a waterspout and before he could blink, there was a knife at his throat. She hissed, "Watch your hands, pretty boy. You have not earned the right to touch an Amazon in such a way."

He stepped back, hands in the air, eyes wild and confused. "But…the way you touched me, and the way you smile at me…"

She scowled. "Never forget, Theseus, that I am an Amazon first and foremost. I chose my own man for sport or marriage.” She winked. “When you are invited to enjoy the unequaled pleasures I can provide, you will know."
~ Excerpt From Ariadne: A Tale of the Minotaur

Email ThisBlogThis!Share to TwitterShare to FacebookShare to Pinterest
Labels: Antiope


"In my mercy I have offered Theseus, the head tribute and son of Aegeus, the chance to revoke the treaty of Tribute now and forever." He looked at Theseus, who remained still, eyes unblinking. "He has only to enter the Labyrinth, kill that which dwells within and return alive. Many of you have named the creature the Minotaur, the Bull of Minos. So be it. If Theseus defeats the Minotaur, he and the others shall return to Athens free and the Tribute will be ended forever. If not it will continue in seven more years."  He stopped and let his gaze travel around, searching. "If any challenges this judgment, let him speak now."

~ Excerpt From Ariadne: A Tale of the Minotaur

Theseus grasps the bull-headed Minotauros by the snout as he prepares to slit its throat with his sword.

A committed bibliophile and neurologist Hines lives in Alaska and helps provide health care to some of the most incredible people in the world, the Alaska Natives. When not working, he is planning some wild adventure to the arctic, Patagonia, or the Himalayas. But more than anything, he loves blending tales of history, mythology, and science, and sees nothing incompatible in the mixture.